Blueberries are a native North American plant They can be eaten fresh or used in pies, muffins, or other treats. They can be dried, canned, or frozen and then be enjoyed during the winter months.

Choose plants that are either 2 to 3 years old. One year old plants have a fairly high mortality rate. Soak the roots for several hours before planting. They should generally be planted four feet apart but will vary depending upon the cultivar,

The chilling requirement varies depending upon specific cultivar but usually ranges between 250 to 1000 hours. The plants are relatively disease free though several viruses and fungi can cause problems in different parts of the United States. The diseases to look out for include fusicoccum canker, pholomopsis, and mummy berry. Blueberry maggots can be a major problem but generally be control either thru the use of sticky boards or insectides.

Nitrogen is usually the element that is most likely to be deficient. Nitrogen should be apply in the ammonium form because blueberries are sensitive to nitrates. Nitrogen should be apply at bud break. The applications of nitrogen can be applied over the growing season which will lead to more efficient use of the fertilizer. Do not apply, nitrogen in late summer because it will lead to vegetative growth late in the season which is subject to winter injury. 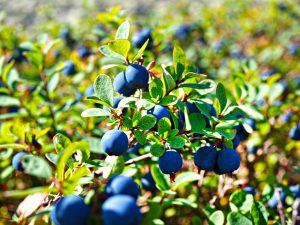 Phosphorous can be applied when the plant is flowering which will help in fruit formation. Potassium shold be added if the plants are shown to have a need for it. Excessive amounts of potassium may lead to a decrease in Magnesium uptake. If a soil test shows that calcium and magnesium are needed, apply both nutrients in the sulfate form.

Calcium and Magnesium sulfates will add these nutrients to the soil but not effect pH. Micronutrients are usually available to the plants unless the pH is too high. To solve micronutrient deficiencies, lower the pH. An application of water soluble form of Fe, Mn, and Cu in the early spring to the foliage can be benefical because these nutrients are not readily mobile in the plant but can be adsorbed by the leaves.

Mulching blueberries has many benefits including better moisture retention, less weeds, better nutrient holding capacity, and more stable soil temperature. A fresh mulch may reduce the amount of nitrigen available to the plant,initially. Additionally, when the material does decompose down in may lead to nitrogen be available late in the season leading to unwanted late season vegetative growth. So it is best to apply mulch which is well rotted.

Proper pruning of blueberry plants helps maintain healthy plants and good fruit production and quality. Blueberries require little pruning in the first few years. Pruning should be done in early spring. Remove any broken branches, those lying close to the ground any damaged branches. Flower buds should be removed the first two years after planting to promote vegetative growth. After two years, in northern climates, all but 2 canes of the years previous growth should be removed while in southern climates 3 or 4 canes may be allowed to stay. After 8 years the plants should have between between 10 to 20 canes in northern climates of varying age while in southern climates about 20 canes should be left. Eight years old canes tend to be less productive than younger canes so it best to remove the one or two of the larger canes. This will help stimulate new growth and continued production. 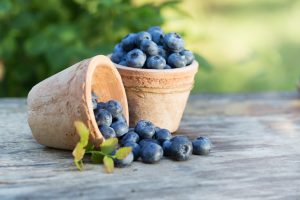 The blueberries will turn blue a week before they are ready to harvest. A red ring around the blueberry will be seen near the stem if not fully ripen. When the berries are ripe they will fall into your hands when touched.

Most planting schemes whether they are large or small benefit from plants that provide structure. This maybe in the form of height, unusual foliage, flowers or seed heads in autumn and winter. There are many different styles of design and choosing which plants work best within each genre can be tricky. Classic styles can use […]

What are the various methods of fixing the bed?

Are you planning to shift your house from one place to another? If yes, then you should keep in mind that at the time of shifting, there are always chances that there can be some sort of breakage in the frame of the bed that will be considered as an ordinary activity. If there is […]